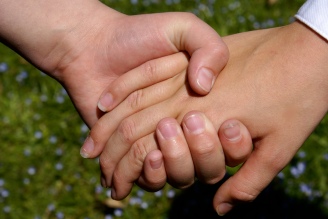 We are not our bodies.

It is one of the central themes of Christianity, the concept that the body and soul are not one in the same, but rather, we are more than the simple trappings we are housed in. Our bodies were built through the clunky process of evolution, and we eventually became who we are today – imperfect vessels acting as temples to hold something more. Our dictate to look past the body in order to see the person is is our calling and our struggle.

We are not our bodies.

We forget this daily. Our bodies, evolved to distrust the outsider, to protect ourselves, to flee or to fight, tell us to judge as if our very survival depends on it. Because, when we were simply another animal in this world, our survival did require it in a way that it does no longer. Our challenge now is to overcome this instinct to fear those who are different from us, to remember that we are not our bodies, and neither are they.

There are other themes to Christianity, of course – compassion, forgiveness, self-sacrifice, love, justice, mercy. But because the struggle to remember that we are not our bodies is something we have for so long publicly resisted, it bears its own mention.

We have tried for too long to force people back into their bodies, telling them to accept who God has made them. We have told people with darker skin they need to remain separated, and told women they need to remain silent. We have, at times, told children they were useless until they were working adults, and have told adults they are broken now that they have grown out of the innocence of children.

But we have been wrong. Evolution has grown the bodies that we wear; God has created our souls.

I am not my body. If I were, I would be nothing more than a pile of freckles, a bladder disorder I’d rather not talk about, and a bum ankle. That is not who I am. I am a mother, a lover, a friend, a believer, a peace-loving fighter who is so much more than simply a body. As we all are.

And so, when someone confides to us that the body they are wearing does not fit, why do we continually try to stuff them back inside? Declaring to someone they must conform to the body they were born in, to behave in a way prescribed by the expectations society has set forth for their genitalia and their chromosomes is to go against the very belief that we are more than our bodies.

Christianity, at its core, is a call to love. And an element of love is trust. We need not fully understand what it is like to live in a body that is a different sex than its gender to trust in what a person says they need to do in order to live in peace.

To love someone is to give them the gift of freedom. Freedom to be who they are, unconditioned upon the body they were born into. Because we are not our bodies.