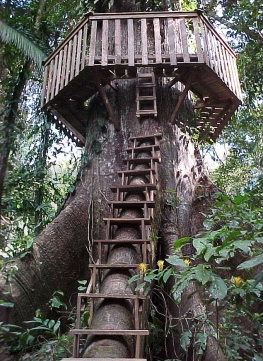 I could hear my son crying from across the playground. I ignored it.

It wasn’t a cry of imminent danger or searing pain, rather the wail of someone who wakes up at 5:30 every morning and is over-tired by noon. I wasn’t too concerned. Nevertheless, at a certain point you must go investigate before the well-meaning grandmothers at the park start coming around to say, “Does anyone know whose little boy that is, crying at the top of the World War II tank?”

Yes, this park has a World War II tank as part of the playground. No, I’m not sure how I feel about it.

The kids think it’s awesome though.

I walked over to the tank. My son was standing at the top, wailing. “What’s wrong, honey?” I asked.

He pointed at the little boy behind him, and then down at the ladder he climbed to get into the tank.

I stifled my laughter. “I think he’s trying to say ladder, honey. It’s just a hard word to say. You’re both saying it a little differently.”

This was not a sufficient answer. I eventually conceded that he was right, this was definitely a wadder that he was at the top of.

On the way home, I called my husband to share the anecdote. In the backseat, I heard my son practicing the word. “Wadder! It’s a wadder! A l-l-l-wadder!”

My son turns free, not three, in a few weeks. He is the wittle brother, and he doesn’t like it when it is waining outside. He’s typically firsty after naps and cries for his water bottle. He loves tigers and wions. And I love the way he talks.

My heart broke a little when I heard him spit out the word correctly. I knew he was proud of himself, and that it was probably my duty as a mother to teach him how pronounce words correctly.

But it’s just so dang cute.

I’m not an overly sentimental mother. I love that every member of my family can walk, and that I only have to put diapers on them before bedtime. The boys are louder and more troublesome than ever before, but they are equally as fun. I don’t miss their babyhood, and I look forward to seeing who they will become.

The problem is, I don’t know those people at all.

Right now, my son is sweet, boisterous, an early riser, and tells me he wuvs me. This is the little boy I love. In ten years, he will be a different child. Perhaps I will call him kind, handsome, a late sleeper, and a talented singer. Or curious, thoughtful, a night owl, and a budding athlete. But he won’t be the little boy I know now.

Every time they slip away from the child they have been into someone new, I have to get to know them again. It seems an impossibility to be so fully in love with a person who then morphs into a new being month after month, year after year and to remain enamored. I am lucky to have known a sleepy newborn, a chubby-kneed crawler, a singing toddler, a budding mischief maker, and a continual charmer.

I love my little boy who says “wadder,” and I know that I will love the one after him who does not. But I’m not in any rush to hurry him onto the next rung. This is a perfectly fine place to pause.