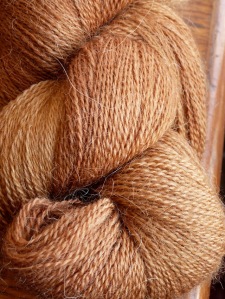 I learned to knit when I was nineteen, in a sunny shoreside beach house with my aunt. I cast four yellow stitches on to a needle, and began to knit. Three minutes later, I slid them all off, wrapping the yarn back into a ball. I started over, and over again, and over again until eventually I had something resembling a triangle.

It was supposed to be a square.

There were several more lopsided dishcloths over the next few years. They were followed by a scarf made out of expensive wool, twisted into a simple garter knit stitch that did not do the yarn justice. After this came hats that fit no one, and scrapped attempts at baby booties that never made their way to baby showers.

Eventually, I gained some competency. I still dropped stitches, and watch rows of holes cascade down my work to the sound of me swearing. Rows were knit and subsequently unknit. But now, when I bound off the final stitches, my projects were recognizable. A sweater. A blanket. A pair of mittens.

We like the idea of homemade items far more than we like things that are actually homemade. Stores sell chunky cardigans and dishcloths with precisely frayed edges. Jars of jam with quaint labels and precision cut gingham wrappers line market shelves. The goods are perfect even in their imperfections, reminding us of the soft comfort of home.

It’s all an illusion.

Homemade sweaters are lumpy, with a left sleeve slightly longer than the right. Homemade jam is slightly too runny, with a scribbled Sharpie note on the lid: “Raspberry jam and/or pancake syrup.” Machines can make everything I make quicker, bigger, and better. They can even manufacture in a bit of homemade charm.

I’m at the beach again this summer. Dangling from my needles is an impossibly small green sweater. When the kids have gone down for naps, I pick it up. Hours and hours of work to make something that costs $19.95 at Target, and will contain several more mistakes.

But it’s not a gift for the baby.

I don’t know how I am going to hold it all together this time around. I knit the first sweater wondering what I was getting myself into, the next worrying if I could love a second child as much as I loved the first. With each stitch, my fingers prayed. Prayers that were drowned out by the hum of a TV in the background and the rhythm of daily life. It was a gift for me.

You don’t tie knots when you are knitting. The stitches are made by pushing one loop of yarn through the next, resulting in a creation that can be completely unraveled if tugged in just the right way. Even at the very end, knitters don’t tie a knot, but rather weave the tail end of yarn through and back through their work. All that holds it together is trust.

My sweater won’t be perfect. Perhaps from a distance it will appear lovely and warm, but up close I can show you each snag and every poorly recovered dropped stitch.

I don’t knit to make something beautiful. That would require a level of skill and discipline I do not possess. I knit to remind myself I am imperfect yet capable. Maybe, when wrapped in soft green wool, a baby can sense the amount of work that when into it’s creation. Maybe it would be just as warm in any old sweater.

I don’t know if I will be able to tie it all together this time around. There will be so many mistakes, and the closer you look the more you will find. A family cannot be purchased off a shelf. It must be built, earned, and assembled by hand. There is no shiny store-bought version. Only those who are somewhat better at hiding their mistakes.

No knots are allowed. No guarantees can be made. Only trust that it will all hold together.

2 thoughts on “I made that”